Junty held 2015 outward bound on July 3rd to 4th in Hong Luo Hu Bird Island which is located in Huairou district in Beijing, China. Directed by the experienced trainer, Junty's team was divided into two groups: "Mockingjay" and "Star War". Each group had its own flag, logo, slogan and song. Two major projects are "Roman Gun Carriage", aiming to shoot water balls as far and precise as possible using gun carriage made by bamboos and ropes, and "Super Designer", targeting at running two balls sequentially through each part of PVC-made roller coasters with a trigger mechanism set in between. Both projects were successfully done by the hardworking, energetic and united group members. Campfire party and bird island visiting were followed in the evening and the next day. This outward bound has deepened the recognition and understanding about the importance of "teamwork", "organization & coordination" and "effective communication" among Junty employees. Junty's culture is involved into these intense, exciting and most of all, educational activities to inspire team's higher work enthusiasm and initiatives. 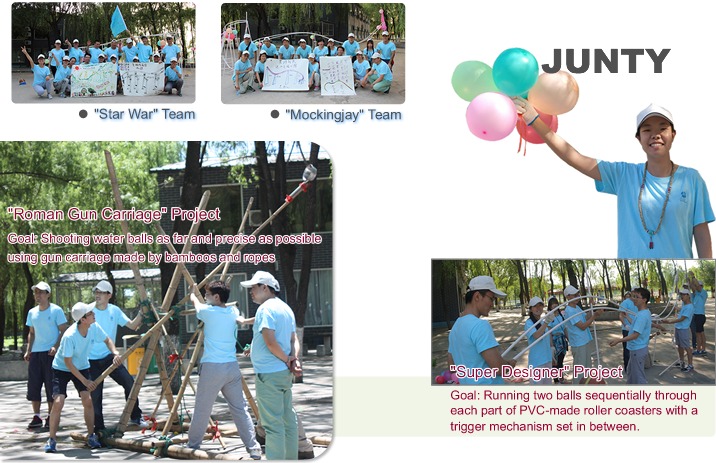